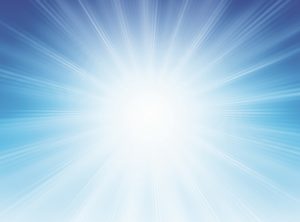 Solar radiation is optically concentrated, thus generating very high temperatures for the power plant process. This high-temperature heat can be stored, allowing electricity to be generated on demand – an important advantage of this technology.

Parabolic trough plants contain numerous parallel rows of collectors that comprise parabolic curved dishes and concentrate sunlight onto an absorber tube that runs along a focal line, thus producing temperatures of about 400 °C. The heat carrier here is circulating thermal oil which absorbs the generated heat and creates steam at a temperature of approximately 390 °C in a heat exchanger. The steam is then used to drive a steam turbine and a generator as in conventional power plants.

In Fresnel collectors long, only slightly curved, flat mirrors concentrate the solar radiation onto a fixed absorber tube, where water is directly heated and vaporised. The resultant steam can be used to generate electricity or used directly in industrial processes for cooling or desalination. The basic concept of these collectors is simpler compared to the parabolic trough. The annual efficiency is lower, which is balanced out by the lower capital investment for the reflective surface.

In solar tower power plants, the solar radiation from hundreds of automatically positioned mirrors is concen-trated onto a central absorber and heat exchanger. The temperatures of up to 1,000 °C are considerably higher than what can be reached with parabolic trough collectors. This allows for greater efficiency, particularly when using steam turbines, and is therefore likely to lead to lower electricity costs.

In Dish Stirling systems, a paraboloid dish concentrates the solar radiation onto the heat receiver of a down-stream Stirling engine, which then converts the thermal energy directly into mechanical power or electricity. Efficiencies of over 30 % are achieved. There are prototype systems, e.g. at the Plataforma Solar in Almería, Spain. These plants are particularly suitable as stand-alone systems. They also offer the possibility of interconnecting several individual systems to create a solar farm, thus meeting electricity demands from 10 kW to several MW.