The use of wind energy to generate electricity is among the most widely developed and most used renewable energy technologies, and is on the increase in more and more countries. Because of the economies of scale resulting from falling system costs in production and project development and the high natural potential, wind energy is becoming economically viable in more and more countries. A distinction is made in the wind energy sector between onshore, small wind and offshore turbines.

Onshore wind energy
Nowadays, onshore wind farms are often set up alongside or close to the coast. To achieve high yields, turbines were developed with high towers and long blades that allow for a large sweep area. Mountain tops or elevated positions are particularly suitable for generating wind energy. There is a wide range of wind power plants for all kinds of applications. Two technologies have been developed for the efficient conversion of wind energy into electricity: The gearless system and the classic drive type with variable rotation speed, gears and fast-running generator.

Grid-connected onshore wind power plants
Wind power plants are either grouped together in so-called wind farms or set up as single units, which normally feed their electricity directly into the available grid. When setting up wind farms, the main expense is the connection to the power grid, which includes cables to the overland grid, control units and transformer substations.

Advantages of onshore wind energy
Investment costs are lower than for offshore plants, which need to be positioned, cabled, installed, operated and maintained at sea, in some cases a long way from land. In addition, decentralised onshore electricity generation is carried out closer to centres of consumption, which requires less investment for grid expansion and operation.

Offshore wind energy
Offshore wind farms may partly replace conventional power stations in the long term because of the greater capacity utilisation as a result of the higher wind speeds at sea. The expected energy yields here exceed any of those on land by up to 100 per cent. Offshore plants have to be sited, cabled, installed, operated and maintained in deep water. The installation of an offshore wind farm is far more technically demanding than that of an onshore wind farm because of the foundations and a complicated grid connection. The construction stages are much more dependent upon the weather and are largely restricted to the period from April to November. In regular operation exposure to strong wind and waves, together with the effects of salty air pose particular challenges for the materials used. As a result, the system costs are significantly higher than those for onshore plants.

The hub height of a 5 MW offshore wind turbine is currently about 90 metres above sea level. The rotor diameter is approximately 125 m, while the rotor blades cover an area about the size of one and a half football fields. The nacelle is as large as a detached house and weighs up to 400 tons; an offshore wind turbine with a total weight of up to 1,000 tons weighs as much as 250 elephants.

Advantages of offshore wind energy
Offshore wind farms create new opportunities for more jobs, especially for specialised services such as those that focus on the existing requirements at sea. This can benefit economically disadvantaged coastal regions. Wind farms with several hundred megawatts of installed capacity deliver constant electricity and can replace large-scale power plants and provide system services such as frequency stabilisation. Offshore wind energy has low competition for the use of the area of water, since there is little potential for alternative applications.

Founded in 2011, KiteGen Venture is the society aimed at the industrial and business development of the KiteGen technology. The natural evolution of an Italian research project, which aims at questioning all dogmas on renewable energies. Thanks to more than 40 international patents, KiteGen is ready to enter the global market, offering a unique and innovative solution to the increasing energy demand. Kite Gen Venture is run by a young and qualified team, motivated to transform this project into practice and to present it to the world.

THE CONCEPT: The KiteGen Technology is designed to provide an answer for the increasing need of energy production, proposing a new type of electric generation plant, based on a renewable source, suitable for any territory unlike the traditional wind turbines, at costs lower than fossil fuel generation plants, in direct competition with today’s conventional production (coal, oil or nuclear), and in the very near future in the GigaWatt class.

HIGH ALTITUDE WINDS: The first real innovation of KiteGen lies in the choice of a high-performance energy source: the high altitude winds, a huge, virtually endless and almost universally available energy power, but still to be explored.

High altitude winds blow all around the globe between 500 and 10000 meters above the surface. Compared to normal winds at ground level, those streams are steadier, stronger and almost equally distributed around the earth’s surface. All these characteristics make the tropospheric winds a unique reservoir with a huge unexploited potential. 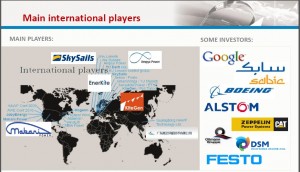