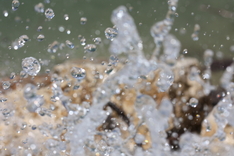 Hydropower has been used for generating electricity ever since the end of the nineteenth century, and is now used in 159 countries around the world.

Today, it is the most widely used renewable energy source for generating electricity worldwide.

The worldwide installed capacity of hydropower amounted to 1.2 TW at the end of 2014 and accounted for approximately 16.2 % of the world’s electricity generation in 2012.
Advantages of hydropower:

There are various types of hydropower plants:

Floating small hydropower plants
The floating hydropower plant is installed within a power buoy, which efficiently exploits the kinetic energy of the water current due its position directly underneath the water surface and its automatic alignment. Additionally, the slow rotation of the turbine protects fish that swim through the buoy.
Use of tidal and marine energy
The kinetic energy of waves, tidal range and tidal flow can be used to generate electricity. Although electricity generation from the natural flow of the oceans is still in its infancy, it has the future potential to make a substantial contribution to the worldwide energy supply. One advantage of utilising marine energy is the base load capability of the generated electricity due to predictable tides, which has a balancing effect on the renewable energy mix. While tidal range power plants are already technically mature, other technologies, such as so-called wave power plants, are still in the development stage. In countries such as Canada, the USA, Russia, Australia or the UK that are surrounded by oceans with high current and/or high tides, there is considerable potential for using tidal and marine energy. Among the challenges are cost reduction, integration into the electricity grid, complex mechanical demands, corrosion and plant maintenance.

Storage power plants
Storage power plants store the water in a natural or artificial lake and feed it via pipelines into a lower-lying power plant. Such plants can operate independently of natural water inflow, and are particularly suited to balancing fluctuations in regional and national electricity generation and consumption. They are used both to cover the electrical base load and for peak load operation.
Pumped storage power plants
Pumped storage power plants use two reservoirs to store water, with the greatest possible height difference between the lower and upper reservoir, which holds water available for generating electricity during peak periods. During off-peak periods (e.g. at night or when there is a large amount of solar or wind energy in the grid), water is pumped from the lower to the upper reservoir. Pelton turbines are used to drive the generator.

Turbines
The type of turbine used depends on the rate of flow and head height (pressure) of the water.

Francis turbine: The Francis turbine is one of the oldest types of conventional turbine, used primarily in small hydropower plants. It is suitable for low drop heights and medium flow rates.

Pelton turbine: The so-called Pelton turbine, a free-stream turbine, is used for high drop heights from 100 m to 1000 m and/or low water volumes.

Installation: It is possible install the system in rivers, small rivers, lakes, ponds and DAMS that already exist.

DAMS: For the DAMS that already exist, the installing our technology is independent of the existing technology, it is not necessary to change anything in the DAMS.

MICRO DAMS: With our technology it is possible to make the small dams with micro turbines.

Installation: It is possible install the system in small rivers, lakes, ponds.